We come now to a very difficult passage of scripture that raises many questions. There are numerous interpretations that man has made as to the meaning of this passage. However, there is only one true interpretation and with the guidance of the Holy Spirit, we will attempt to arrive at the most accurate interpretation possible.

In order to wrap our minds around what we see here, let us review the following chart that explains end time events: 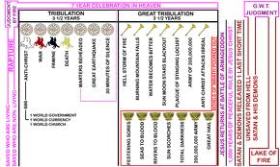 There are several observations to point out here. The first observation is the rapture of the church. We are currently living in the dispensation of grace or, as some may call, the church age. This is the time in which ‘whosever will may come’ and receive Jesus Christ as their Savior. During this age, the church has been given the responsibility of bringing the Gospel message to the world. All those who come to faith in Christ will be ‘raptured’ from the earth before God’s wrath is poured out during the time period that we know as the tribulation and the great tribulation. 1 Thessalonians 4:13-18 gives a description of the rapture: “But we do not want you to be uninformed, brothers, about those who are asleep, that you may not grieve as others do who have no hope. 14 For since we believe that Jesus died and rose again, even so, through Jesus, God will bring with him those who have fallen asleep. 15 For this we declare to you by a word from the Lord, that we who are alive, who are left until the coming of the Lord, will not precede those who have fallen asleep. 16 For the Lord himself will descend from heaven with a cry of command, with the voice of an archangel, and with the sound of the trumpet of God. And the dead in Christ will rise first. 17 Then we who are alive, who are left, will be caught up together with them in the clouds to meet the Lord in the air, and so we will always be with the Lord. 18 Therefore encourage one another with these words.” [1]The term ‘caught up’ is where we get the word ‘rapture.’ There is coming a day when the trumpet of God will sound and all those who have placed their faith in Jesus will be ‘caught up’ in the clouds and we will meet Jesus as He escorts us into heaven. The second observation to note is the tribulation.  The tribulation is the first 3 ½ years after the rapture of the church. It is in this time that the seven seals are broken and the world begins to fall into great deception and turmoil. It is during this time that we see what is known as the four horsemen of the apocalypse. A third observation is the great tribulation. The great tribulation is the final 3 1/2 years. During this time, the wrath of God will poured out upon the earth and there will be suffering on this planet like has never been seen before. As the great tribulation comes to a close, Jesus will return to the earth at the battle of Armageddon. Jesus Christ, along with His bride (the church), will destroy the armies of the earth. After this great and terrible battle, Jesus will set up His kingdom on the earth and will rule for a thousand years. We call this the millennial reign of Christ.  During the millennial reign Satan and his demons will be bound. At the end of the millennial reign, Satan and his demons will be loosed for a short period. He will attempt to deceive those who survived the tribulation and those who are born during the millennial reign to follow him. After this time, all those who never placed their faith in Jesus from every dispensation of time will stand before God at the great white throne judgment. At this judgment, the book of life will be open, revealing the absence of their names. All those standing before God that day are those whose names are not found in the book of life. They are then cast into the lake of fire, where they will spend eternity. At this time God will create a new heaven and a new earth. All those from every dispensation that have come to faith in Christ will then live for eternity in the new heaven and new earth. Imagine what we as believers in Christ have to look forward to!

Now that we have established a good view of what is to come. Let us look now more specifically at the first four seals which is the four horsemen of the apocalypse. Keep in mind that these things take place after the rapture of the church.

The first seal: the white horse. Notice what Revelation 6:1-2 says. “Now I saw when the Lamb opened one of the seals; and I heard one of the four living creatures saying with a voice like thunder, “Come and see.” 2 And I looked, and behold, a white horse. He who sat on it had a bow; and a crown was given to him, and he went out conquering and to conquer.”[2] The Lamb of God (Jesus Christ) opens the first seal. As the first seal is opened, a white horse is seen and the rider goes forth to conquer. There are several ideas as to who is the rider of the white horse. Though some may disagree, I believe that the rider of the white horse is the antichrist. After the rapture of the church, the world is in chaos and is in desperate need of peace and stability. A ruler comes on the scene and unites the world and organizes a one-world government. The rider of the white horse has a bow but no arrows. He has a crown, which indicates his authority and power. He goes forth into the world and conquers. The fact that he has no arrows for his bow shows that this is not a bloody take over. Through diplomatic channels and a great deal of deception, the rider of the white horse is able to unite the nations of the world through peaceful negotiations. He is also establishes a peace treaty with Israel. Wiersbe writes, “Daniel states that there is a “prince that shall come,” who will make a covenant with Israel to protect her from her enemies (Dan. 9:26–27). In other words, the future world dictator begins his career as a peacemaker! He will go from victory to victory and finally control the whole world.”[3] The antichrist will also establish a one-world church and a one-world currency. Basically, he finds a way to unite the world’s governments, religions, and economies. When you consider what is happening in our world today, this not far-fetched. The economy of the world continues to decline and may soon crash. Religious wars continue to rage. The entire world is fed up with their leaders. Everyone is crying out for peace and stability. When one rises to power who is able to bring such unity, the whole world will gladly follow him and even worship him.

The second seal: the red horse. Verses 3-4 describes a red horse. “When He opened the second seal, I heard the second living creature saying, “Come and see.” 4 Another horse, fiery red, went out. And it was granted to the one who sat on it to take peace from the earth, and that people should kill one another; and there was given to him a great sword.”[4] This red horse brings conflict and war to the world. He has a sword which shows that he uses military might. As the antichrist brings peace to the world, it is a false peace, and soon the world breaks out in war. “Antichrist’s conquest begins in peace, but soon he exchanges the empty bow for a sword. The color red is often associated with terror and death: the red dragon (Rev. 12:3), the red beast (Rev. 17:3). It is a picture of wanton bloodshed. War has been a part of man’s experience since Cain killed Abel, so this image would speak to believers in every age, reminding them that God is ultimately in control, even though He is not responsible for the lawless deeds of men and nations.”[5]

The third seal: the black horse. “When He opened the third seal, I heard the third living creature say, “Come and see.” So I looked, and behold, a black horse, and he who sat on it had a pair of scales in his hand. 6 And I heard a voice in the midst of the four living creatures saying, “A quart of wheat for a denarius, and three quarts of barley for a denarius; and do not harm the oil and the wine.”[6]The black horse represents famine. “A day’s wages” refers to a silver coin, the Roman denarius, worth about 15 cents, which was the normal wage for a worker for an entire day. So this passage is saying that in that food shortage an entire day’s work would be required to buy either a quart of wheat or three quarts of barley. If one bought wheat, it would be enough for one good meal; if he bought barley, it would be enough for three good meals but nothing would be left for buying oil or wine. Famine is the inevitable aftermath of war. This will be a major cause of death in the Great Tribulation. The black color of the horse speaks of famine and death.”[7]

The fourth seal: the pale horse. Notice what Revelation 6:7-8 says. “When He opened the fourth seal, I heard the voice of the fourth living creature saying, “Come and see.” 8 So I looked, and behold, a pale horse. And the name of him who sat on it was Death, and Hades followed with him. And power was given to them over a fourth of the earth, to kill with sword, with hunger, with death, and by the beasts of the earth.”[8] During this time of the antichrist’s rule, death sweeps across the globe. People die from starvation and war. “The startling fact is revealed that a fourth of the earth, or approximately a billion people by today’s population figures, will be killed by these means.” [9] As terrible as these events are, this is just the beginning. Soon, the seventh seal will be opened which will bring about the trumpet and the bowl judgments which contain wrath coming directly from God. These first four seals reveal turmoil on the earth brought on by the actions of the antichrist. Later on, the turmoil comes more directly from the hand of God.

Looking at what is to come can be very frightening. However, there is no fear for those who have a relationship with Jesus. As believers, we must rejoice and be very thankful that we will be celebrating in heaven as the earth experiences great tribulation. The understanding of what is to come should also challenge us to do everything we can to get the Gospel to the world so that others may be saved from the wrath that is to come.